strains pl (tune):
the ~s of
el sonido de;
to the ~s of the violin
al son del violín

he ~ed every muscle to lift the weight

TANGLED UP IN GEMS

I've been struck by the virtuosity of Dylan's last masterpiece, and I cannot but feel surprised by the lack of interest in people surrounding me. It's obvious Dylan's rough voice, dinosaurs age and weakful but elegant image is not at any bit part of the self-stored today's picture of a star. 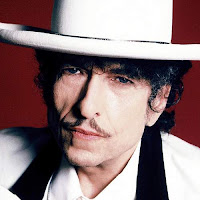 And for this very same reason I've been searching for reviews anywhere on the internet, up to Le Monde, El Mundo, The Times or Rolling Stone; they all agree with me, time has come to enjoy and get thrilled

At some stages I get to feel that breathtaking lapses of my lifetime have nothing to converge with the rest of the human race. But here I am, sharing feelings with lunatics and pedants that publish their opinions as they were extracts from the Holy Bible. Nevertheless it's beautiful when one of this so-called writers defines with piercing literacy what I can't help experiencing listening to Bob Dylan.

So to speak I can say that bold letters down revealed to me as "every one of them words rang true/ and glowed like burnin' coal /pourin' off of every page/ like it was written in my soul from me to you/...


"The most anticipated and/or revelatory songs are surely the eight-minute Red River Shore, an unreleased gem from the Time out of Mind sessions; a definitive Oh Mercy-era version of Born in Time; two breathtaking cuts of Mississippi, also from the Time out of Mind sessions, the first stripped back to the point of unbearable vulnerability, the second somehow at once careworn and heartfelt. It’s tempting to knock off a star for that outrageous RRP, but there are so many jewels here — ’Cross the Green Mountain, from Gods and Generals, the 2003 television epic about the American civil war; the piano demo of Dignity; Miss the Mississippi, from the star-crossed David Bromberg sessions in 1992; and the bruised and almost structureless Dreamin’ of You, whose lyrics, as so often, were later raided or developed on other songs — that anything less than five would be a scandal too. "

(this is Dan Cairns giving 5 out of 5 for The Times Review)
published by Jaime
Etiquetas: music